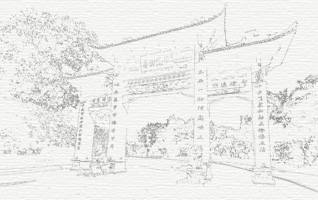 “Bodhi is originally without any tree; the bright mirror is also not a stand. Originally there is not a single thing; where could any dust be attracted?” This widely spread chant is written by the Sixth Patriarch Huineng. A student of the Fifth Patriarch Hongren, he is an advocate of pure and unattached mind and sudden enlightenment. His important achievement is the innovative combination of Indian Buddhist doctrines with Chinese culture and thinking and the subsequent foundation of Zen Buddhism that has gained popularity in Southern China, Hong Kong, Macau and Southeast Asia. It’s from here that Zen has transformed from a form of practice into an independent Buddhist school. His sudden enlightenment, innovation and informal teaching have started a new pattern of Zen Buddhism and laid a solid foundation for its subsequent development.

The Zen ideas of Huineng throughout his life have been collected in The Platform Sutra of the Sixth Patriarch. Known as the Three Saints in the East together with Laozi and Confucius, the Sixth Patriarch Huineng is vitally important in the Chinese Buddhist, ideological and cultural history.


Built against the hill and by the river, ZEN HOTSPRING RESORT is right next to Guoen Temple. Zen-inspired and wellness-focused, it’s South China’s first hotspring resort themed with Zen culture.